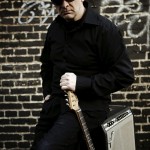 I live in the musical city of Copenhagen and started as a musician, playing rock guitar as a teenager. Later I became a session musican and have played a lot of venues and festivals in Denmark.

Later I got involved in the glorious art of producing and have contributed to nearly 80 releases (singles/albums) as a musician, producer and remixer.
I was nominated for a Grammy (Danish Music Award) together with one of my musical partners, DJ Henrik Hjarnoe.

Our project “Nagano All Stars” (also with DJ Lars Freisig) have sold worldwide, “Push It to the limit” exceeds the sale in over 1 million copies and my music is still played all over the world.

The new sound of Mohavi is a lot different from the things above.
It’s my personal vision in sound and music and I hope you enjoy it!