Out now! The album is here!

THE DEBUT ALBUM FROM ELECTRONIC COWBOY MOHAVI IS HERE 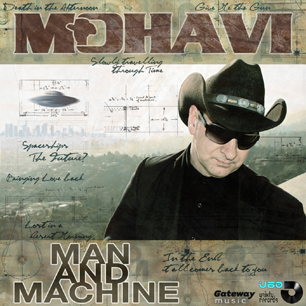 Finally it’s here: The album “Man and Machine” has been released

The music of Mohavi unfolds in a cross between Americana, Kitsch and Electronica and is clearly heard inspired by both David Lynch as Morricones movie music, classic Kraftwerk, techno and modern club music, which include due Mohavis unique application of an original vocoder, a Roland VP-300 from 1979.

The energetic musician has with the album created his own ballgame and style, which has been called “cowboy-techno” of the inner circle. The sound is retro, quirky and dusty. It is highly danceable music in a unique blend. The album also contains a few quieter numbers and here impresses Anne Christine Wold with her sensitive voice that convincingly slides into the guitarist great techno landscapes.

Mohavi has been in the Danish music scene for many years, but now makes his debut as a solo artist under the new name. Both as a producer and artist, he has left his strong mark on the entire process. Besides playing almost all instruments Mohavi has even directed and edited music videos and created artwork, graphics and visual design for the site and covers.

MOHAVI on iTunes:
Man and Machine

MOHAVI on You See Play:
Man and Machine